Twenty-six-year old Nicholas can often be found riding his bike around town or to the local 7-Eleven. While that might not seem out of the ordinary for most young adults, for Nick, he is literally peddling his way to becoming self-sufficient since moving into an SCO residence for young adults with special needs.

Nick is deaf and has a developmental disability, and until recently he considered himself much of a homebody, keeping to himself and relying on staff for many activities of daily living. That is, until he moved into SCO’s Individual Residential Alternative (IRA) in Farmingdale. The confidence and level of independence Nick has gained while at the IRA is nothing short of amazing. With support and guidance of SCO staff, Nick pushed himself to step outside of his comfort zone and ever since, there has been no slowing him down.

He now holds a part-time job at the Traffic and Parking Violation Agency and has learned to use the Access-a Ride bus by himself to get to and from work. He does his own laundry, prepares meals, engages in phone calls via video chat, and for the first time in his life, enjoys going out into the community on his own.

All of this new-found independence is a welcome relief for Nick’s parents, whose worries for his future have finally been eased. Since the age of 10, Nick lived in specialized residential schools for deaf youth until he aged out at 21 and moved back home. They were concerned they wouldn’t find an appropriate setting that could meet his needs as an adult. Nick has become so self-sufficient that he has his eye on moving into a supported apartment in the near future – something they couldn’t have imagined until recently. Until then, Nick will keep rolling along on his way to becoming
even more independent. The Community Habilitation program teaches children and adults who are living at home daily living skills and gives them the opportunity to participate in activities that foster independence and will allow them to live in the community successfully.

Support for individuals with special needs

“The confidence Nick has grown in the short time he’s been at the group home is amazing." Learn More 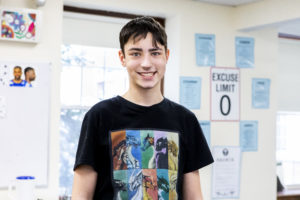