The call came on a Tuesday.

Brigid, a special education teacher who’d taken in foster children, told SCO she was ready to adopt. After being a temporary mom, helping to strengthen and reunite families, she wanted to build a “forever family” of her own. And then, one day, her phone rang.

Three days later little Noah was in her arms. The first day was intense, but Brigid recalls, “I woke up the next day and looked at him in his crib and thought, ‘This is my kid, and this is meant to be.’”

The legal adoption process would take six years, and SCO was there every step of the way.

“SCO’s adoption unit was really on it, so organized,” Brigid recalls with gratitude. “They were able to explain everything going on in court. It took a long time, and they were like, ‘Let’s stick with it.’”

“Throughout the process SCO was really supportive of his birth mom too. They recognized that she really loved this baby, but that life circumstances meant he wouldn’t be safe there.” So SCO worked hard to support both Noah’s adoptive mother and his birth mother, and to sustain and nourish both relationships.

And then, the big day came. “His adoption court appearance took five minutes, but when they said he was legally my son, it took my breath away.”

“He’s my world,” Brigid says. “I love being a mom. It’s my favorite thing in the world.” SCO’s Family Foster Care program provides comprehensive services to the child, birth parent, and foster parent, with the goal of creating positive relationships and achieving positive outcomes of reunification with their families or creating new families through adoption.

For our older youth in care we help prepare them to become independent young adults by connecting them to education and employment opportunities such as work readiness partnerships with area businesses and peer mentoring, a unique program where former foster children guide foster teens. 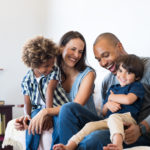 For over 50 years, SCO's Foster Care practice has been helping children and their families grow, heal and thrive. We find safe, temporary families for children and teens throughout New York City and Long Island. Read More

Foster Care Youth Sharpen Skills On and Off the Court