Thanks to the many acts of generosity, care and compassion by donors from eastern Long Island to New York City, children, teens and adults throughout SCO’s programs will enjoy a taste of holiday magic.

SCO has always provided holiday gifts for the people we serve, going back to when the agency and the number of people we served was much smaller than it is today. But this year may be our most successful effort yet. Some 5,600 of our clients – from infants through adults – will receive approximately 15,000 gifts!

Hundreds of donors, including individuals, informal groups of friends, churches, schools, Scouts, motorcyclists and businesses have donated gifts by the truckload! Toys, of course, but also hats, gloves, scarves, and makeup sets and gift cards. Cologne, basketballs and footballs, hoodies, handheld games, board games – you name it. In many cases, donors sponsored parties and events for the children and families.

Here is just a sample of some of the festivities and gift-gathering that will mean so much to the people we serve:

In Queens, Choka Lyme, headed by Bobby Roghubir, held its fifth annual toy drive on Dec. 13th and collected an estimated 1,000 gifts from some 400 people! “My heart’s desire is helping people,” says Bobby. “And people feel proud to be able to help.” The toy drive party featured food, music, clowns, a magician and Santa – and has been growing every year. “Our motto is simple,” says Bobby. “Simple people doing simple things in a big way.”

In Brooklyn, some 50 children in our Family Foster Care Program were invited to shop with Brooklyn Nets star Joe Johnson at his annual “Shop with a Jock” event at Target. Each participant received a $100 gift card to buy toys, games or anything else they desired. On Long Island, participating stores at American Manhasset & Wheatley stores donated a portion of their sales to SCO thanks to holiday shoppers during the “Champions for Charity” event who selected SCO when they registered.

Nearly 30 high school students from the Garden City High School Heart to Heart Club volunteered their time at the Madonna Heights Family Service Clinic annual Christmas party for some 100 children on Dec.6th. The students hold bake sales throughout the year to raise funds to provide crafts and games for children attending the party.

That same day, Al’s Angels brought Santa and Frosty the Snowman to our Robert J. McMahon Children’s Center to deliver gifts to the children there.

And hundreds of motorcycle enthusiasts, including Santa Claus, roared into Sea Cliff, Long Island on Sunday bearing gifts for the kids at our Robert J. McMahon Children’s Center during The Who Cares Committee‘s 29th annual Toy Run. “Just look at their faces,” said Bill Mato, President of Who Cares. “You can’t beat that.”  The cyclists, sanctioned by the American Motorcycle Association, are dedicated to helping children with disabilities on Long Island.

Thanks to friends of our late and beloved volunteer, Kathy Catapano, who began the tradition 10 years ago, volunteers filled 16 bags with toys, blankets and other gifts for the babies and toddlers who live with their mothers in our Independence Inn program for young moms and runaway and homeless youth. The group also loaded up some 50 duffel bags with gifts for the Inns’ young adult residents. Kathy’s husband, Phil, has continued the annual event in his wife’s honor after her death a year ago. “This was important to Kathy and she would want us to keep it going,” Phil says. In a visit to one of the Inns last spring, many residents told Phil the duffel bags were the first Christmas presents they’d ever received. “That sealed the deal.”

Thanks to St. Bartholomew Church’s Christmas Miracles, 70 youth at our Ottilie RTF and campus residences got their holiday wishes. The kids sent their lists to the church where generous parishioners purchased and wrapped every gift that will be distributed during their holiday parties this week.

Warner Brothers talent came to help transform the Ottilie auditorium into a Winter Wonderland for upcoming holiday parties and family visits. Volunteers helped youth create a fireplace out of boxes and construction paper, wrap presents, and create snowflakes.  The two WB volunteers were Donnie Keshawarz from the show “Forever,” who brought his 13-year-old daughter, Sofia, and David Mazouz from the show “Gotham,” accompanied by his mother, Rachel.

Dozens of excited children in our family foster care program dressed up in the holiday finest and gathered at 570 Fulton St. to receive gifts from a very jolly Santa Claus, courtesy of the New York City Department of Correction (NYC DOC). Correction staff have purchased and delivered gifts for our children in care for many years, aided by SCO Program Director Carmen Wagner and her staff.

Santa danced into our Ottilie RTF Tuesday bearing gifts for residents and their families. A special thanks to the Christmas Miracles volunteers at NYC’s St. Bartholomew Church, which provided the presents specifically for each of the Ottilie youth. The joyous night included a rousing rendition of “Jingle Bell Rock” and other holiday songs thanks to Leo, Rasheem and Joshua,, and two lucky raffle winners walked away with a holiday turkey and all the fixin’s.

Children and families from our Jerome Hardeman Early Childhood Center enjoyed a visit from Santa at Teddy Mountain, where the kids met Santa and created their own stuffed animals with the help of his elves.

SCO partnered with the Garden of Dreams Foundation to celebrate the holidays at SCO’s Flushing Family Residence, featuring a visit from the Knicks City Dancers and a sleighful of gifts. Employees from Madison Square Garden, the Beacon Theater and Radio City Music Hall, as well as New York Rangers players and staff, donated holiday gifts – including items such as winter coats, microwaves, educational toys and bicycles – to 99 families in need.

Thanks to the generosity of New York Rangers legend Adam Graves, SCO Board Member Michele Cubic and volunteers from Credit Suisse, the Family Dynamics Beacon Community Center at MS 35 hosted a holiday party for some 300 children and family members on Thursday. Partygoers enjoyed dancing, basketball, making gingerbread houses, face painting, holiday crafts,  a photo booth and cuisines from around the world. Students from FD’s after-school program even treated attendees to a group dance performance. 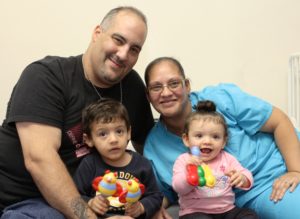